The Power & Pitfalls of Periscope

Periscope is the 2-month-old social live streaming application now available for both Apple iOS and Android users. Periscope allows people to share their video with everyone using the service or a selected group. These videos have the ability to be replayed for 24hours after they have ended. Lots of people love the unique visual feedback system of hearts that appear on the phone’s screen as people tap to notify the presenter they are interested in what he or she has to say. I have been using the service for a month now and find that there are both positive and negative attributes to the service. Using the application appropriately is key. There is definitely a power in Periscoping, but there are also some pitfalls users need to be aware of. Currently around 2% of twitter users are using Periscope.

News: I don’t see Periscope being used for this purpose as often as I would like, but maybe it is because the service is new. I see breaking news and information better laid out on Snapchat. There is power in seeing individuals in the midst of a protest or at an event. Getting the first person perspective, gives an individual the chance to sympathize with those in any given situation.

Developing Self-Awareness: Using Periscope is a great way to find out more about yourself because it forces a broadcaster or watcher to reflect on what is being discussed. If you are the one broadcasting, it is a great way to hone your thoughts. You get other people’s opinions on issues and get instant feedback on whether you are engaging or not. Putting yourself out there is not easy, but don’t get heartbroken if everyone leaves your room. Just try again! It’s also a great practice to test your resilience.

Public Speaking: If you are interested in getting into public speaking, what better way is there to see if you have those chops than to undergo a trial by fire? There are more people watching than broadcasting. Based on feedback from users, the major reasons why people don’t broadcast is because they can not accept criticism or feeling that they don’t have anything interesting to say. I think everyone has a story, so I always suggest to just try it before you say no. You might surprise yourself.

Connectedness: After polling over 500 users, the most common positive comment was that Periscope makes people feel more connected to each other. People enjoy using the app because it fosters shared experiences.
I participated in the first South Florida Periscope Meet Up for Red Nose Day and was happy to meet others in my new community which included Alexa Rose Carlin @alexarosecarlin, the founder of Hello Perfect, an organization that strives to help people create a positive outlook for themselves. 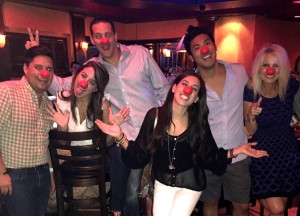 @JasonWittrock showing us a simple arm and chest routine.

Fitness Goals: There are fitness gurus on Periscope that will educate you and make you feel that you have the support you need when you feel that diet or workout has kicked your butt. It’s the kind of talk that those who are pretty self directed otherwise need to hear every now and then to keep them pushing through. They also provide the opportunity for users to ask the burning questions that you just don’t want to read in a health magazine, but want to hear someone who puts their words to practice. Jason Wittrock, @JasonWittrock is my favorite Periscoper in this field. He’s a Bodybuilding.com spokesmodel, gives great advice, and supports anyone looking to improve his or her health. He even takes you grocery shopping with him. Who hasn’t wondered what people that are in such great shape eat? Now the viewer has a chance to ask him questions. There are also plenty of people on their own fitness journeys that provide support to each other. I find this kind of community extremely helpful, interesting, and rewarding.

Business: There are many people on Periscope sharing their business expertise. Periscope is a great way to facilitate leads. It is also a great free way to advertise to an audience that is immediately receptive to what you have to offer. Periscope could benefit everyone from real-estate agents to car salespeople.

Education: I haven’t seen Educators jumping to get on this platform. The school year is coming to a close, so maybe they will begin to trickle on. Educators are a big population of Twitter users. I am curious to see where people in my profession will take this application. I can definitely see this in language learning, as part of professional development, and school improvement. I will be writing another blog to discuss how educators can utilize Periscope very soon.

Celebrity Interaction: An interesting component of Periscope is the ability to interact with celebrities or influential individuals on a closer level than we have ever seen before. While seeing celebrities and interacting with them is interesting, most users were much more interested in interacting with your average periscoper. Some celebs and influencers are doing it right and interacting with their audience. The pet peeve of most users is when a celebrity hands their device off to someone else to record them. You quickly see a drop off of users interested in those celebrities. It’s interesting to see that there are lots of every day Periscopers who have more followers and hearts than your celebrity. 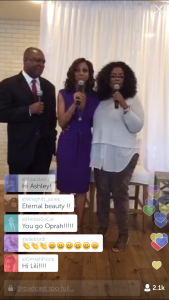 Oprah at OWN headquarters with the Peete’s 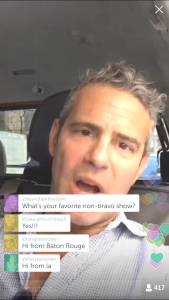 Andy Cohen of Bravo on his way to get fitted for the Met Ball.

The Pitfalls
With the good come the bad and the ugly. There is plenty of bad and ugly on Periscope. Here is the shortlist of Periscope’s pitfalls.

It’s addictive: There are people using Periscope that are on it entirely too much. Most people don’t want to see you take a shower, sit there and beg for hearts, or be useless. Content creation and audience retention is key.

Escapism: If you lead an unfulfilled life, making cyber friends might be helpful to pushing through a depression, but it should not be your cocoon to shelter you through the reality that is life. Get out there and do things that you are proud of.

Perves, Trolls, & Drugs: Many people who I surveyed were upset by the amount of perverts on the application. You can be having a perfectly great conversation with people and here comes a person saying the most inappropriate things. You need to block them, but I call for a ban of people that get blocked by a certain number of users. People have also mentioned trolls, or people just being negative and annoying for no apparent reason.

Potential Legal issues: The application is new so I am sure there is not much out there about legality issues. I have seen people streaming entire concerts. The well-known reporter, Ann Curry streamed much of a recent The WHO concert. Many users streamed the Pacquiao/Mayerweather fight and there was some discussion on media regarding the issue then, but I am sure it will bubble up again. Will there be penalties for users who are streaming? It has also been reported that some users have been cyber stalked, bullied, or stalked in real life by other users. There need to be laws that protect online users from this type of behavior.

There are many great uses for Periscope. Please use it responsibly and be aware of the pitfalls. If you have any questions about the service or how you can use it to benefit you, feel free to contact me. I give social media consultations and will be happy to teach you or your group how to use any of the popular social media applications out there. Catch me on Periscope & Twitter @educatesofl or email me Christopher@educatesouthflorida.com.